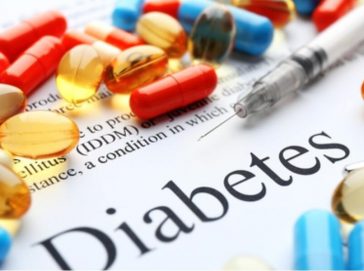 Take a look at diabetes

Diabetes is a metabolic disorder in the body that has two main types.

The first type of the disease may be genetic, in which the body’s ability to produce the hormone insulin is lost, and the destruction of beta cells in the pancreas leads to a defect in insulin production. This type of diabetes is caused by an immune reaction and a disorder known to the liver. The main cause of beta cell loss is due to cellular immune response. Following the destruction of beta cells by lymphocytes, insulin secretion decreases until the existing insulin cannot regulate blood sugar. Loss of 3 to 3% of beta-hyperglycemic cells (increased blood sugar) occurs after loss. It is at this stage that the patient needs external insulin to prevent ketosis and to control hyperglycemia and fat and protein metabolism.

The second type of the disease may be due to inactivity and weight gain, and the body becomes resistant to insulin, so the insulin it produces cannot function properly. Eventually, it may lead to the destruction of pancreatic beta cells and a complete defect in insulin production. In this type of diabetes, which accounts for between 2% and 25% of all types of diabetes, a person’s body produces insulin, and even the concentration of insulin in the blood may be higher than usual, but the person’s cellular receptors are more resistant to insulin. Insulin is not allowed to enter cells. Type 2 diabetes is more common in obese people and in women. In this type of diabetes, ketoacidosis rarely occurs spontaneously. This type of diabetes usually remains undiagnosed for years because hyperglycemia develops gradually and is not early enough to show the classic symptoms of diabetes. However, these patients are at risk for a variety of diabetes complications. Insulin resistance may decrease with weight loss and medication, but rarely returns to normal.

Many patients do not easily fall into one of the specific categories of diabetes. Elevated blood sugar caused by diabetes destroys very small blood vessels in the body that can affect various organs of the body, such as the kidneys, eyes and nerves.

According to the latest measure of the American Diabetes Association, the diagnosis of diabetes is confirmed by recording one of the following:

Hemoglobin A1C Test: This blood test, which does not require fasting, indicates your blood sugar level over the past two or three months. This measures the amount of blood sugar bound to hemoglobin. The higher your blood sugar, the more hemoglobin you have with the sugar. A1C shows 6.5% or higher of diabetes. A1C between 5.7% and 6.4% indicates pre-diabetes. Below 5.7% is normal.

Oral Glucose Tolerance Test (OGTT): For this test, blood sugar levels are measured after at least eight hours of fasting and then two hours after eating a solution containing glucose: Blood sugar is less than 140 mg per liter per liter. Between 140 and 199 milligrams per liter of pre-diabetes. More than 200 mg / dL indicates diabetes.

Random Blood Sugar Test: Blood samples are taken at random. Regardless of the time of the last meal, if the accidental blood sugar level of 200 mg per deciliter or higher indicates diabetes.

In fact, there is no definitive cure for diabetes, and it can only be controlled if it is not in the acute stages. Diabetes is a serious disease, and to treat it, avoid self-medication and see a doctor. That people with diabetes can do. Insulin injections are commonly used to treat type 2 diabetes, and insulin types fall into five categories: Rapid-acting, Regular or short-action, Intermediate-acting, long-acting, Ultra-long-acting.

For the treatment of some people with type 2 diabetes, exercise and diet are enough, and some need medication.

Diet and nutrition of diabetics